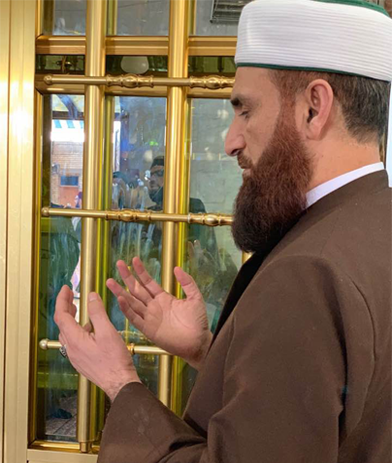 His forefathers include Hazrat Shaykh Imamuddin (may Allah be pleased with him), a great scholar of Mantiq (logic) and Hadith. He received his religious education at Hashtnagri, Peshawar, and received his Khilafate from Hazrat Akhund Darweza Baba (Hazrat Pir Baba – may Allah be pleased with him) of Swat. Students and disciples flocked to him from around the world. Hazrat Imamuddin was a prolific writer of handwritten books, many of which can still be found in the Bhera Shareef library. 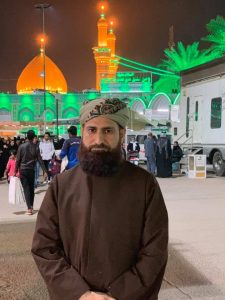 This fountain of knowledge and wisdom springing from within Haripur predominately stems from the madrassa in Bhera Shareef, where hundreds of students are currently studying the sacred knowledge of Islam under the supervision of Pir Mohammad Tayyab ur Rehman Qadri’s father (Hazrat Pir Mohammad Mohib ur Rehman Qadri). This family of prominent scholars and great saints, this blessed household has spread the teachings of Islam in the light of Sufism throughout the world and have devotees in their thousands all across the globe.

Pir Mohammad Tayyab ur Rehman Qadri was born in Tanda, District Mansehra, KPK in 1973. He began his Islamic education locally, which was continued in Darul Uloom Islamia Qadria, Behra Shareef (including commencing Hifz-E-Quran). He continued his education in Islamic sciences in the Darul Uloom Islamia Rehmania, Haripur. Following this he spent eight years studying in Wah Cantt (Punjab). He also went to Jamia Nizamia, Lahore, where he spent one and a half years, and also studied at the Jamia Islamia Akora Khattak (Ahle-Sunnat, Brehlvi) in KPK, from where he graduated. Following this he began working as an Arabic teacher at the Government High School Sarri, Haripur. Hazrat Pir Mohammad Mohib ur Rehman Qadri had planned for his son to run the Madrassa, but his grandfather through marriage (Hazrat Mohammad Gul Rehman Qadri), Mufti Azam of the UK, voiced his desire for Pir Mohammad Tayyab ur Rehman Qadri to come to the UK. In 1997, Pir Sahib took up the role of Imam and Khateeb of Jamia Masjid Rahmania, Charles Road, Birmingham. 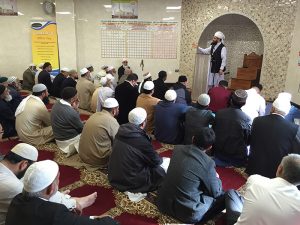 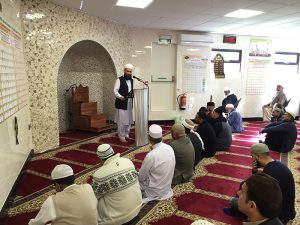 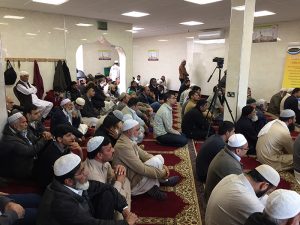 In 1999, Pir Sahib began teaching Qur’an and Hadith studies at Jamia Masjid, Woodlands Road, Birmingham, where he spent eight years (until 2007). During this time he purchased a building (previously a factory) on Alfred Street in Sparkbrook. He named this Masjid Qadria Trust and in 2007 took on the role of chairman. Currently there are about 20 teachers and 200 students who attend the Community Education Centre being run by Qadria Trust (receiving education of Hifz-e Quran, Islamic Studies and Nazra). There are also many devotees who attend the five daily prayers in the Masjid run by the Trust. There is a weekly Dhikr Mehfil on Sunday evenings at which food is served to the congregation.

Hundreds of Muslims gather in the Masjid to listen to the holy sermons of Pir Mohammad Tayyab ur Rehman Qadri, and many more on social media, with an international audience including Europe, the Middle East, and Indian subcontinent. Currently work is underway to build Masjid Rahmania, a much larger Masjid and Community Education Centre, which will be able to accommodate the growing demands of the Birmingham Muslim community regarding space for congregational prayers and Islamic education of their children, as well as providing many community services promoting social cohesion and interfaith dialogue.

Following arrival in the UK, Pir Sahib undertook an English language course, further Arabic studies and computer programming. In 2011, Pir Sahib attended an Arabic course at the University of Birmingham, Edgbaston, and in 2014 he completed a level 3 chaplaincy course at the Nishkam Centre, Handsworth. This was followed by a level 3 business course in 2016, and a week-long intensive course on Taddribull Fatwa at Dar Al-Ifta Al-Missriyyah, Cairo in 2017.

Apart from the Facebook feed for the weekly Sunday Dhikr Mehfils, Pir Mohammad Tayyab ur Rehman Qadri regularly starred in religious programmes on Noor TV for 8 years, which included live question and answer sessions in both Pashto and Urdu. Pir Sahib has also presented many interviews on Madani Channel and live Ramadan programmes on Prime TV. Pir Sahib currently holds the post of Naib Amir (deputy leader) of Jamaat Ahle Sunnat (UK). He has close contact with community leaders both on a local and national level and has very close ties with West Midlands Police. Pakistani ministers and other dignitaries visiting the UK often attend Qadria Trust. Pir Sahib’s father, Hazrat Pir Mohammad Mohib-ur-Rehman Qadri has regularly visited the UK, and always been very happy with the services his son is providing.

In around 2000 Pir Mohammad Tayyab ur Rehman Qadri received Khilafate from his father and also grandfather through marriage (Mufti Mohammad Gul Rehman Qadri) in the Qadri Silsila, with chains leading back to Shaykh Sayyed Abdul Qader Jilani (may Allah be pleased with him) via Taj-us-Shariah, Mufti Akhtar Raza Khan (may Allah be pleased with him), Brehli Shareef. Pir Sahib has performed several Hajj, and performs Umrah on a nearly yearly basis. Every year Pir Sahib receives several invitations to deliver seminars across the world (and has done so in South Africa, Egypt, Iraq, Syria (pre-war), Dubai, Morocco, and Pakistan), and he uses these opportunities to spread the true message of love and unity in Islam in light of the teachings of Sufism.